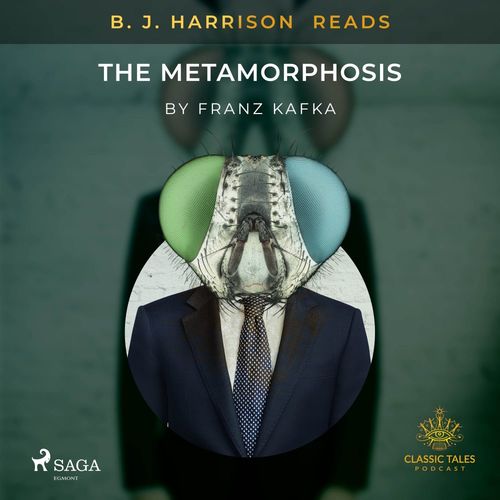 B. J. Harrison Reads The Metamorphosis

Gregor Samsa is a travelling salesman who wakes up one morning to realize that he been transformed from a human being to a "monstrous vermin". He reflects back on his life, his work, his relationship with his family and his employer, and he realizes that each relationship he has been a part of has been fake. He feels responsible for his family but he does not receive any gratitude from them. The alienation is unbearable and irreversible. His life will either have to change drastically or he will stay victim of his own existential anxiety.
"The Metamorphosis" is a novel about the constant battle between the society's evil powers and every person's will to fight back.

B. J. Harrison started his Classic Tales Podcast back in 2007, wanting to breathe new life into classic stories. He masterfully plays with a wide array of voices and accents and has since then produced over 500 audiobooks. Now in collaboration with SAGA Egmont, his engaging narration of these famous classics is available to readers everywhere.

Franz Kafka was a Czech-Austrian author who lived in the period 1883-1924. His literary legacy consists of many short stories and novels. His style is characterized by a fusion between realism, fiction and fantastic elements. The surrealistic moments in his works are used to interpret themes like existential anxiety and guilt - topics that were often discussed during his time. He depicted the problems of his time in an unusual way, which in turn made him one of the most influential writers of the 20th century. Some of his best known works are "The Metamorphosis", "The Trial" and "The Castle"; they are however but a small part of Kafka's large literary legacy.