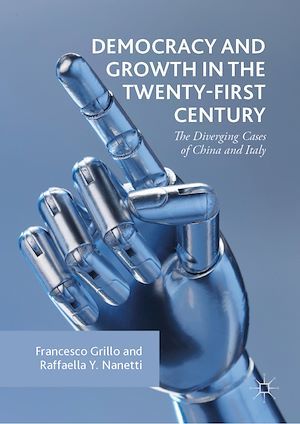 Democracy and Growth in the Twenty-first Century

Is democracy still the best political regime for countries to adapt to economic and technological pressures and increase their level of prosperity? While the West seems to have stagnated in an environment of political mistrust, increasing inequality and low growth, the rise of the East has shown that it may not be liberal democracy that is best at accommodating the social mutations that technologies have triggered.
The cases of China and Italy form the research focus as two extremes in growth performance. China is the star of globalisation in the East, while Italy is the laggard of globalisation in the West and a laboratory of creeping political meltdown now shared by other major Western economies. But is this forever? Introducing the `innovation paradox' as the main challenge to the West and the notion of `knowledge democracy' as key to sustainable growth, this book presents a new side to the debate on the Fourth Industrial Revolution (or fifth as the authors argue). It is a vital reading for all those questioning what kind of democracy positively impacts innovation as the force whose speed and direction transforms societies and economies.