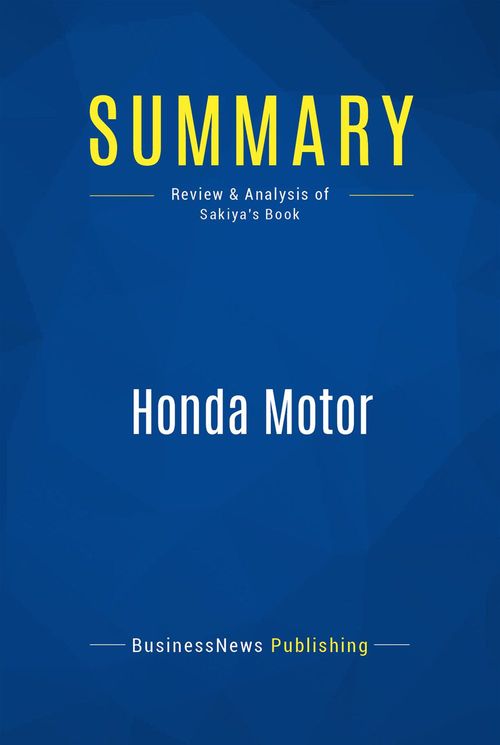 This work offers a summary of the book "HONDA MOTOR: The Men, the Management, the Machines" by Tetsuo Sakiya.
Tetsuo Sakiya explains the business strategies and culture of Honda, and suggests why they are successful, especially in comparison to the Western model (where car companies are struggling). It´s a compelling read, and demonstrates clearly how company values - instilled at an early stage - can affect the business, decades after their introduction. Sakiya charts the beginnings of Honda to the successful, multinational it is today.
He shows, for example, that early success was predicated on meshing different expertise: Honda had technological vision; Fujisawa had business vision. Both of them were willing to take risks: Fujisawa invested in a lightweight motorcycle, when others thought he was mad, but he was proved right; Honda had ideas ahead of its time, and was willing to invest in them.
Honda Motor is a story of overcoming prejudice (against Japanese people after the Second World War), of putting money into creative marketing and PR, and having an international vision very soon after inception. The legacy of the founders was to marry two seemingly contradictory notions - a willingness to expand and change, but also core values that remain constant - which has become a winning formula. A fascinating read.