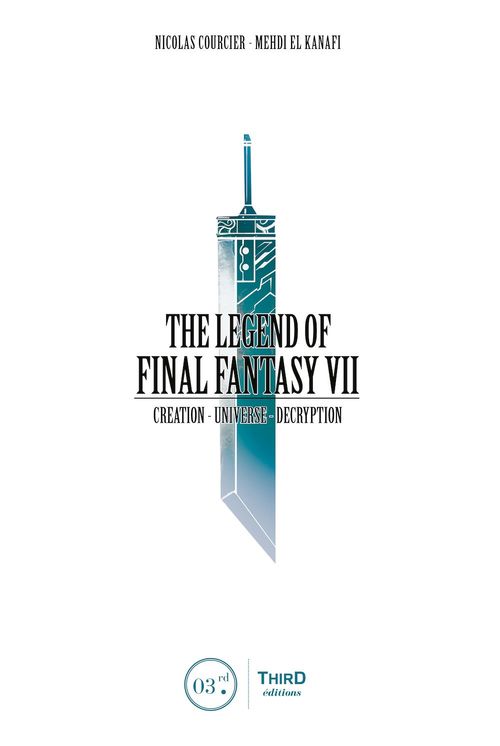 The Legend of Final Fantasy VII

What gamer hasn't tried Final Fantasy VII?
The game, released in 1997, is now the standard-bearer of a whole generation, and it's also the one which catapulted Sony's PlayStation onto center stage. To celebrate this mythic video game's 15th anniversary, Third Editions wanted to throw itself back into this unbelievable universe. This carefully crafted publication takes a look back at all the titles that helped forge Final Fantasy VII's mythology (including the Compilation of FF VII), and deciphers their content through examination and original analysis.
This book was written by Nicolas Courcier and Mehdi El Kanafi, former authors and now publishers. The first print was release in 2011.
An essential book to (re) discover the universe of the mythical series Final Fantasy!
EXTRACT
To celebrate one of the most important RPGs in the history of video games, Third Editions has decided to publish a tribute book: a heartfelt edition, but also one that truly analyzes the games that revolve around this legendary RPG. Indeed, the subject of this book is not only Final Fantasy VII, but the entire Compilation of Final Fantasy VII, from Advent Children to Before Crisis, including Crisis Core and Dirge of Cerberus, without forgetting Last Order.
To get this journey off on the right foot and refresh your memory, we begin by summarizing the Final Fantasy VII saga. For the first time ever, the full story will be told in chronological order: from the Planet's origins to the awakening of Genesis, as depicted in the secret ending of Dirge of Cerberus. Once the entire saga has been told, we will take you behind the scenes so that you can discover how the video game compilation was created. You will learn about the people whose unexpected decisions changed the game's design. We will also provide a number of anecdotes pertaining to the game's overall development. A complete interpretation will then be offered for each title, paving the way for numerous reflections.
ABOUT THE AUTHORS
Nicolas Courcier and Mehdi El Kanafi - Fascinated by print media since childhood, Nicolas Courcier and Mehdi El Kanafi wasted no time in launching their first magazine, Console Syndrome, in 2004. After five issues with distribution limited to the Toulouse region of France, they decided to found a publishing house under the same name. One year later, their small business was acquired by another leading publisher of works about video games. In their four years in the world of publishing, Nicolas and Mehdi published more than twenty works on major video game series, and wrote several of those works themselves: Metal Gear Solid. Hideo Kojima's Magnum Opus, Resident Evil Of Zombies and Men, and The Legend of Final Fantasy VII and IX. Since 2015, they have continued their editorial focus on analyzing major video game series at a new publishing house that they founded together: Third.
Grégoire Hellot is a French freelance journalist who specializes in video games. He began his career in the field more than twenty years ago when he joined Joypad magazine. As a pioneer dealing in Japanese video games, he has contributed to the French public's acceptance of these unique titles. Today, he contributes to the Gamekult website and is also the Managing Director of Kurokawa Editions, created in 2005 by the publishing house Univers Poche. Grégoire is also known for his role as the Silver Mousquetaire in the TV series France Five.