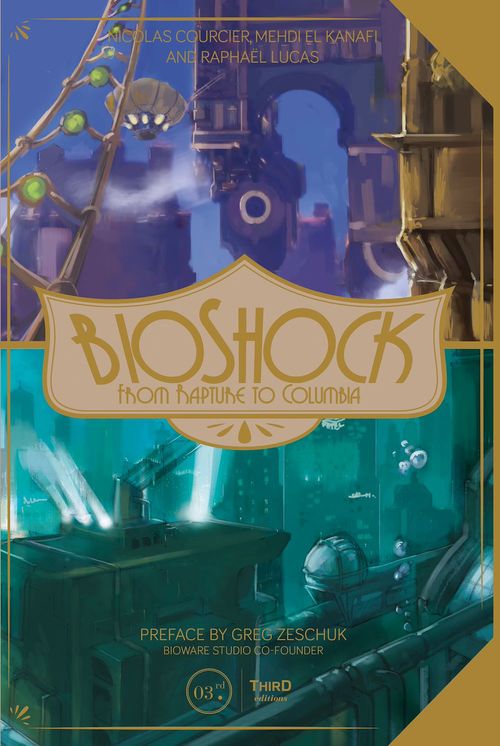 A unique and extraordinary saga of video games.
In just three installments, the BioShock saga made a special place for itself in the hearts of players. These games boast completely unique and extraordinary stories and worlds. The first two installments take place in the underwater city of Rapture. Immersed in the Art Deco style and a 1950s atmosphere, the player advances through an open, intelligent gameplay that encourages creativity and careful use of the resources provided by the surroundings. BioShock Infinite, the third installment, draws us in to explore the floating city of Columbia in a uchronic, steampunk-laden 1912.Third Éditions aims to pay tribute to this hit series-which, despite its short history, has already gained critical acclaim. Dive into this unique volume that explores the games' origins and provides an original analysis of each installment.
Discover a complete analysis of the three installments of the BioSchok Saga! The video game will not have secrets for you anymore !
EXTRACT
After years marked by total abstruseness, the early 2000s saw the transition of PC games to the world of consoles. In market terms, game consoles had reached a general-public status, ensuring high popularity-but the PC market put up strong resistance, in particular by selling downloadable games through stores such as Steam.
Numerous PC-based developers, such as Warren Spector (Deus Ex, Epie Mickey), Peter Molyneux (Populous, Fable), and of course Ken Levine, began developing for consoles. In the same vein, numerous genres that were typically destined for PC gaming began migrating to consoles. This change certainly had numerous causes, one being Microsoft's arrival on the console market with Xbox (with architecture close to a PC). In addition, typical inconveniences in PC development were eliminated (games no longer had to be designed for a wide variety of configurations, as a console by nature has a stable internal architecture). Finally, there was the question of pirating-even though it exists on consoles, it is much more common on PCs. As a result, major developers such as Valve Corporation (Portal 2), BioWare (Mass Effect) and Bethesda Softworks (Fallout 4 and Skyrim entered the market, and the general mentality changed.
ABOUT THE AUTHORS
Nicolas Courcier and Mehdi El Kanafi - Fascinated by print media since childhood, Nicolas Courcier and Mehdi El Kanafi wasted no time in launching their first magazine, Console Syndrome, in 2004. After five issues with distribution limited to the Toulouse region of France, they decided to found a publishing house under the same name. One year later, their small business was acquired by another leading publisher of works about video games. In their four years in the world of publishing, Nicolas and Mehdi published more than twenty works on major video game series, and wrote several of those works themselves: Metal Gear Solid. Hideo Kojima's Magnum Opus, Resident Evil Of Zombies and Men, and The Legend of Final Fantasy VII and IX. Since 2015, they have continued their editorial focus on analyzing major video game series at a new publishing house that they founded together: Third.
Raphaël Lucas - Raphaël has over fifteen years of experience in the world of video game writing. A reader of Tilt and a fan of a renowned French video game journalist AHL, he first pursued a university éducation. After obtaining a master`s degree in history from the University of Paris 1, he then became a freelancer for PC Team before working for Gameplay RPG and PlayMag. In October 2004, he joined the group Future France and worked for Joypad, PlayStation Magazine, Consoles + and Joystick, not to mention a few other contributions to film magazines. Today, he writes for Jeux Vidéo Magazine as well as the magazine The Game. He is also the co-author of The Legend of Final Fantasy IX.